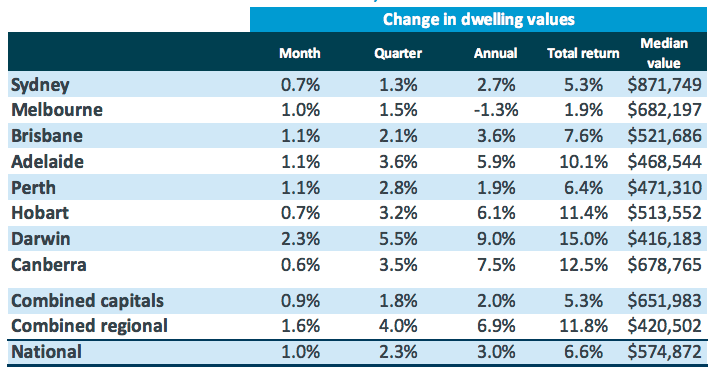 Despite the predictions of widespread and dramatic falls in house prices in 2020, it appears the exact opposite has unfolded.

The latest data from CoreLogic shows that house prices across the country have finished the year incredibly strong, marked by a 1% increase in home values in the month of December.

Annually, house prices across the nation showed a 3% rise, which comes against a backdrop of uncertainty and widespread lockdowns in some of the major cities, including both Melbourne and Sydney.

Over the course of the year, we started to see a clear move into regional areas, backed up by CoreLogic data, showing house prices rising by 6.9% across the regional areas of Australia.

Although housing markets are gathering pace, four of the eight capitals are still recording dwelling values lower, relative to their previous peaks. Melbourne home values are still -4.1% below their March 2020 peak and Sydney dwelling values need to recover a further 3.9% before surpassing the previous July 2017 peak. Perth and Darwin’s values remain -19.9% and -25.7% below their 2014 peaks.

While transaction volumes fell away sharply in early 2020 (particularly in March and April where they fell 40%), by years end, transactions were 8% higher than the same time last year.

Similarly, listings only fully started to recover in November, where there were approximately 165,000 properties available for sale, -18% lower relative to the same period in 2019.

According to CoreLogic, one of the key reasons for the turnaround in house prices has been the sharp cuts to interest rates and the easy monetary policy from the RBA that is expected to continue for a number of years.

Although the overall property market remains strong, CoreLogicnotes that there is still some risk ahead, as the end of mortgage holidays and Government stimulus programs, such as JobKeeper and JobSeeker, continue to be wound back.

Want to know more ? Ask us a question.